Blood pressure homeostasis is maintained by a P311–TGF-β axis

Blood pressure homeostasis is maintained by a P311–TGF-β axis

P311 is an 8-kDa intracellular protein that is highly conserved across species and is expressed in the nervous system as well as in vascular and visceral smooth muscle cells. -null () mice display learning and memory defects, but alterations in their vasculature have not been previously described. Here we report that mice are markedly hypotensive with accompanying defects in vascular tone and VSMC contractility. Functional abnormalities in mice resulted from decreased total and active levels of TGF-β1, TGF-β2, and TGF-β3 that arise as a specific consequence of decreased translation. Vascular hypofunctionality was fully rescued in vitro and in vivo by exogenous TGF-β1–TGF-β3. Conversely, -transgenic () mice had elevated levels of TGF-β1–TGF-β3 and subsequent hypertension. Consistent with findings attained in mouse models, arteries recovered from hypertensive human patients displayed increased P311 expression. Thus, we identified P311 as the first protein known to modulate TGF-β translation and the first pan-regulator of TGF-β expression under steady-state conditions. Together, our findings point to P311 as a critical blood pressure regulator and establish a potential link between P311 expression and the development of hypertensive disease. 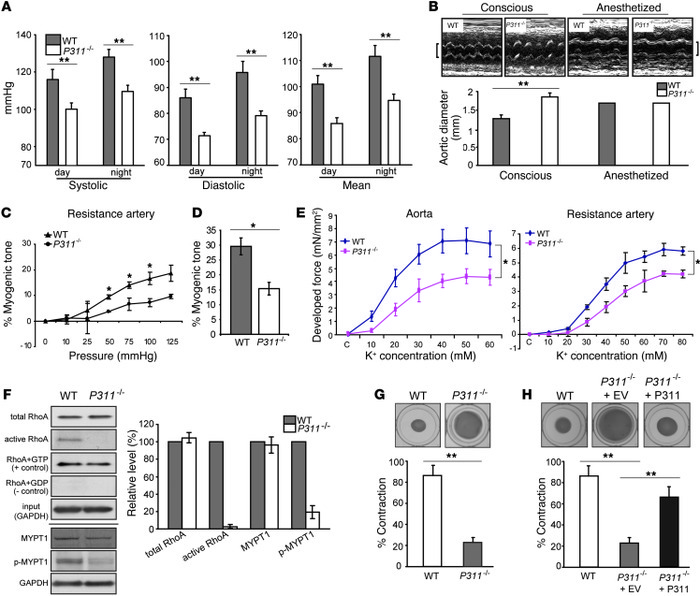